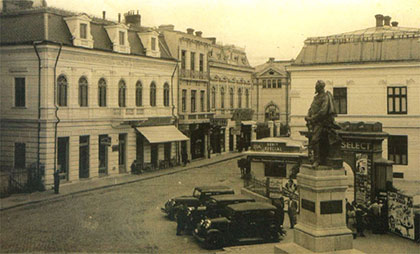 There has been a long-going interest in drama in Craiova, traceable in a large array of shows organized here: old folklore, puppet and shadow, itinerant companies and circus artists ones. An early piece of evidence of this activity is the 1596 mention of an ‘improvisation theatre’ in “The Chronicle of Michael the Brave’s Reign” (see Oltenia’s archives). Undoubtedly, the mention is there thanks to the commercial relationships that Craiova had developed with Vienna, Venice, Trieste, Lipsca-Leipzig, Tarigrad, Petersburg and Breslau-Bratislava.

“The History of Craiova” (Scrisul Românesc Publishing House, Craiova, 1977) mentions Italian ‘buffoon shows’ in 1811 and a German company which performed two of August von Kotzebue’s plays – “Emperor Claudius” (Kaiser Claudius) and “The Window Comedy” (Das Lustspiel am Fenster) in 1830. We also learn that ‘the highly respectable authorities of Dolj county’  were asked to grant the theatre company run by Valéry and Theodore Gaffrey the permission to perform ‘theatrical pieces on the days with no club activity, which will conform to the current good manners and religious morality’, in 1840.

As far as opera is concerned, ‘in 1837, the German Theatre Society performed in Craiova «The Puritans», a great drama in three acts by Romani (sic) (Carlo Pepoli), music by Vincenzo Bellini’, – this first opera show in Craiova took place only one year after its première in Paris. The composer George Simonis claimed that in Craiova there were sung fragments from “Norma” by Vincenzo Bellini and “Roberto il Diavolo” by Giacomo Meyerbeer. The operas respective scores belonged to Simonis family and bore the annotation ‘used at the Kraiova Theatre in 1844 by the Kapellmeister Simonis’.

In 1850, Costache Caragiale and Costache Mihăileanu, with the aid of Pera Opran Filişeanu and the scholar Gheorghe Chiţu, founded a permanent theatre. 29th of June 1850 appears in the annals of Craiova as the inauguration date of the National Theatre, with the first performances being first held in the High school’s Auditorium, then in a wooden building, with double, earth-filled walls. The first season’s repertoire was mostly made up of vaudevilles: “The Muse from Burdujeni” by Costache Negruzzi, “Rustic Wedding” by Vasile Alecsandri, “The Village Boyar” by I. Dumitrescu, “Quarantine” by Costache Negruzzi and others. 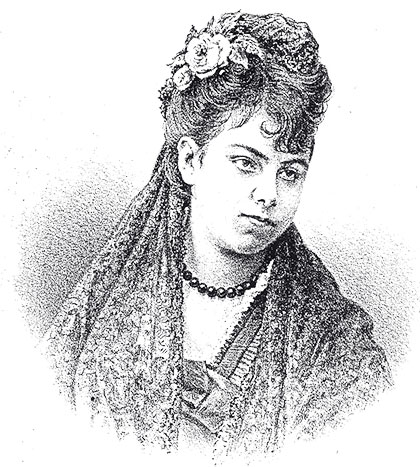 During the 1853-1854 season, the theatre was managed by Pera Opran, while in 1854 the position was given to Theodor Teodorini. The beginning of his administration was marked by a great loss, the playhouse  burning down on New Year’s Eve. In May 1856, a new National Theatre, built in Neo-classical style, in the Street of Justice, was inaugurated.

Theodor Teodorini died in 1873, leaving behind a rich artistic heritage: ‘a new building for the theatre and a repertoire made up of 325 works, most of them original’.

The wife of Theodor Teodorini, Maria Teodorini, followed in his footsteps as the theatre manager and started strengthening the company. She hired Profira and Ion Fărcăşanu, Aristizza Romanescu (Paulina Stavrescu’s daughter and Maria Teodorini’s sister), Clotilde Ademolo, Aron Bobescu, Al. Manu and Mia Teodorescu, Ion Livescu and Al. Demetrescu Dan. In 1887,‘helped by her daughter, Elena Teodorini, she restored the theatre building, introducing electric light, which did not exist elsewhere in Craiova, so that on the 15th of January 1888, the season started in an almost new theatre’.

The real celebration of the opening of the Theatre in Craiova, mentioned in “The History of the National Theatre in Craiova” (Aius Publishing House, Craiova, 2000), took place in the autumn of 1889, with a concert in which Elena Teodorini sang, followed by other shows in which she sang opposite to Concetta Zanchi, a mezzo-soprano, Serafino Zanchi del Falco, a tenor, Enrico Broggi, a baritone and other artists from Craiova.

The most important moment for the music life in Craiova at the end of the 19th century was the founding of the “Dramatic Society” by Maria Teodorini, in agreement with ‘the regulations of the theatre law’ (passed in 1877 and applied in Craiova as late as 1889). During the first season of the “Dramatic Society”, its committee settled for the creation of an operetta company and thus an operetta department was inaugurated in Craiova in the 1889-1890 season.

These were very productive years for the Theatre in Craiova. The Teodorini family’s concern for enhancing its prestige was further demonstrated by the establishing of the company’s own orchestra and the renowned conductors and composers that were invited to work here: Eduard Wachmann, Alexandru Flechtenmacher, Ion Andrei Wachmann, Carl Theodor Wagner and the whole Bobescu family.

The musicologist Viorel Cosma, in an article published in “Ahead” (Înainte), a newspaper, on 27th March 1973, highlighted Craiova’s role in Romanian music history. ‘For me, the town of Craiova remains the cradle of classic operetta music in Romania, an artistic center with a great tradition, splendidly illustrated by the former companies of Teodorini and Al. Bobescu’.

In “The History of the National Theatre of Craiova” there are mentioned ‘two distinct operetta companies in 1890, one led by Al. G. P. Marinescu and one by A. Bobescu, something not to be seen in any other Romanian theatre’.

Since the establishment of a stable operetta company in 1889, the National Theatre alternated drama and comedy shows with opera and operetta ones; since 1894-1895, the theatre show prevailed over the musical one in Craiova, due to the introduction of drama and tragedy by the actor, poet and playwright Ioan I. Livescu. Original Romanian and translated or adapted foreign comedies, couplets and vaudevilles were still performed with great success, as part of a wide dramatic repertoire.

The beginning of the 20th century to the present…

In the first years of the new century, many opera and operetta performances by ‘some great European companies and artists’  took place in Craiova. Once Grigore Gabrielescu, a tenor, occupied the position of manager in 1904, a series of famous names of the lyrical and dramatic European stage could be heard and seen in Craiova: Georges Courtois, Sarah Bernahardt, Paulina Giovanni, Rafael Punza, Adolfo Sterngola, Salvatore Sciaretti. At the same time, important plays and operas entered the theatre’s repertoire, such as “Ernani”, “Un Ballo in maschera”, “Rigoletto”, “La Traviata”, “Il Trovatore”, “Aida” by G. Verdi, “La Gioconda” by A. Ponchielli, “Faust” by Ch. Gounod, “I Pagliacci” by R. Leoncavallo, “Cavalleria rusticana” by P. Mascagni, “Lucia di Lammermoor” by G. Donizetti, “Carmen” by G. Bizet and “La Tosca” by G. Puccini.

The National Theatre in Craiova, which bore Theodor Teodorini’s name until 1889, burned down in August 1927. Between 1927-1932, performances were held in the building of the “Modern” cinema, on whose frontispiece one could read “Modern Theatre Cinema”.

Between 1893 and 1895 the building of Carol the 1st High school was raised, in French Academic Art style – with Neo-classical elements and a central rotunda with rhythmical Corinthian pillars. The rotunda corner was heightened, while preserving the initial aspect, by building a new floor between 1923 and 1927. The building included a superb auditorium in Italian style.

Here, the Theatre held its shows between 1933 and 1973. The building of the High school fell victim to another fire in 1930, and was restored by the Italian architect Giovanni Battista Peresutti.

The economic crisis of the ’30 and the ensuing political decisions led to the closing down of the National Theatre. It was re-opened in 1942.

“The History of Craiova” chronicled the shows after 1950, which were brought on stage due to the collaboration with other cultural institutions such as the Philharmonics, the National Theatre, The Artistic Company “Nicolae Bălcescu”, the Popular Arts School, as well as some amateur companies: “The Bird Seller” by Carl Zeller, “Ana Lugojana” by Filaret Barbu, “The Happy Widow” by Franz Lehár, “New Moon” by Ciprian Porumbescu and “The Gypsy Baron” by Johann Strauss (son).

On the 1st of January 1972, the operetta department was established as part of the ”Oltenia” State Philharmonic, the first season opening with “Viennese Blood” by Johann Strauss (son).

Starting with 1974, one can speak about a three-tier activity of the operetta department: besides opera and operetta shows, a musical show for children entered the repertoire, namely “The Naughty Rooster”, by Constantin Ungureanu, (a composer from Craiova), based on a story by Ion Luchian.

On 28th of May 1979 the Executive Committee of the Popular Council of Dolj passed Decision no.264 which established The Lyrical Theatre Craiova starting from the 1st of June 1979.

The lyrical theater was thus separated from “Oltenia” Philharmonic that had embraced it for seven seasons with a lot of sacrifices (a double activity for the choir and the orchestra, for the conductor Teodor Costin and the choirmaster Alexandru Racu).

Because the Lyrical Theatre of Craiova started to focus on opera, under the influence of Modest Cichirdan and Emil Maxim, both conductors, who also tried to establish the ballet performance as an independent show, the latter made the formal request of changing the name of the institution from The Lyrical Theatre in The Opera and Operetta Theatre of Craiova. This was granted through the Decision no. 36 of the County Council of Dolj on 23rd of September 1996.

On the 9th of October 2002, the Local Council of Craiova, under whose supervision the theatre was, passed Decision no. 208 which changed the name of the institution from The Opera and Operetta Theatre of Craiova in The “Elena Teodorini” Lyrical Theatre.

Recently, the management team of the institution asked for another change of name into THE ROMANIAN OPERA CRAIOVA, a request justified by the large number of opera shows in the current repertoire. The Local Council of Craiova agreed to this, passing Decision no. 763 on 28th of November 2013.